The new era of airport hubs?

As a consequence of the travel restrictions imposed on fights due to the global COVID-19 pandemic, airlines have reduced their capacity offers and grounded part of their fleet, particularly the big quads such as B747 and A380. These aircraft being mainly operated to connect hub congested airports, the hub-and-spoke system seems to be over, to the benefit of more point-to-point flights. So how can one envisage a new era for airport hubs?

The fate of traditional hubs

In a broad organizational context, a hub is the effective centre of an activity, region, or network. For aviation, hub airports are traditionally meant to concentrate passenger traffic and flight operations at a given airport and mainly serve as transfer (or stop-over) points to get passengers to their destination. It is part of the famous hub-and-spoke system by which an airline will operate flights from several non-hub (spoke) cities to the hub airport, and passengers traveling between spoke cities need to connect through the hub, thus creating economies of scale. It allows an airline to serve city-pairs that could otherwise not be economically served on a non-stop basis (point-to-point model).

Long-haul flights, performed by big aircraft models such as B747 and A380, connect these hubs and airlines operate fewer flights to serve a higher number of destinations and operate fewer aircraft.

However, when they can choose, passengers prefer to avoid congested hub airports where they must queue for another flight to their destination and prefer to have a direct point-to-point flight. Moreover, even if the hub-to-hub flight can be a kind of aircraft-sharing (by analogy to car sharing), connecting through a hub airport can actually mean flying a longer distance for each passenger, then having a bigger (climate change) environmental impact. As engine performance and reliability has dramatically improved over time, twin-engine aircraft are now allowed to fly more direct routes even above seas, oceans or desertic areas, making them far more competitive and more fuel efficient than quads.

The impact of COVID-19 and associated restrictions

For about one year now, the various lockdowns and travel restrictions in reaction to the COVID-19 pandemic have affected air travel like no other economic sector. In 2020, demand for air travel (revenue passenger kilometers or RPKs) fell by 65.9% compared to the full year 2019[1], by far the sharpest traffic decline in aviation history. Europe’s airports lost 1.72 billion passengers in 2020 compared to the previous year, a decrease of -70.4%, bringing them back to their traffic level of 1995[2]. To adapt their capacity to the current demand, most companies have parked a large part of their fleets, temporarily or permanently. The current economic stress, doubled with environmental pressure for operating aircraft that are more fuel-efficient and consequently emit less CO2, generated the end of operations of quad-engine aircraft (B747, A380 and A340). These aircraft will probably be scrapped and dismantled, and hopefully recycled by some experts of aircraft green recycling such as TARMAC AEROSAVE.

In such conditions, who could pretend that we are entering a new era for airport hubs?

CO2 emissions from civil aviation represent about 2% of man-made CO2 emissions[3], and are directly proportional to fuel burn by a factor of around 3.16. In other words, each ton of fuel burnt emits 3,16 tons of CO2; this relation is pure chemistry and has nothing to do with technology or operations. Although the share of aviation’s CO2 emissions remained globally constant over the past decades[4], the absolute emissions keep increasing as traffic increases, reaching 915 Million Tons in 2019 [3].

Assuming that the traffic will recover from the current crisis associated to the COVID-19 consequences, one of the key solutions to decarbonize the sector is to speed and scale up the development and usage of new types of energy, including electricity, hydrogen and sustainable aviation fuels (SAF).

To achieve the industry’s ambitious goal of reducing the CO2 emissions of the sector by half in 2050, compared to 2005 levels and to be consistent with the global requirements of the Paris agreement, all new types of decarbonated energy need to be considered. However, SAF will have a predominant role in that process as they are already available (even if the level of available volumes needs to be scaled up) and will remain the only solution for medium and long-haul flights in the period running to 2050[5]. 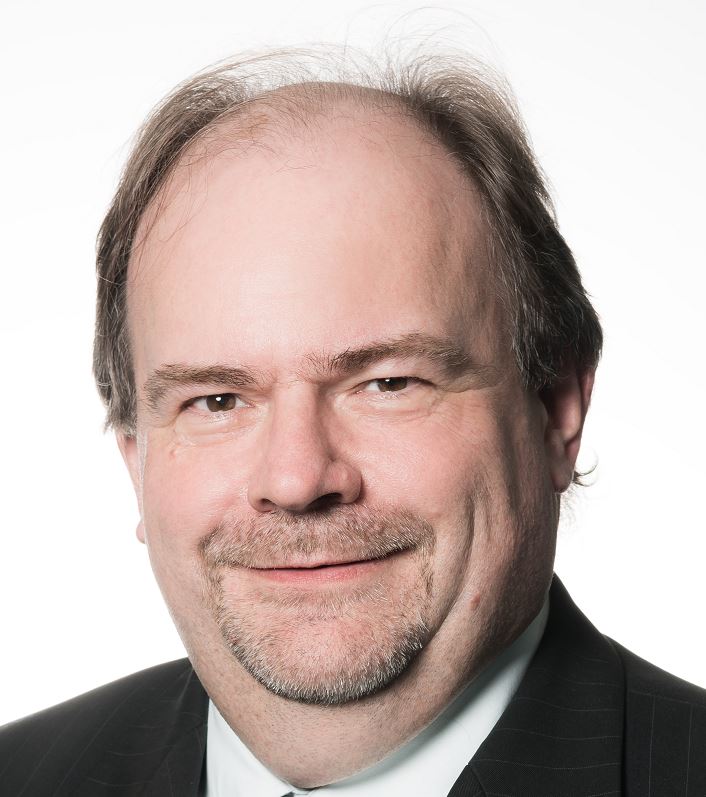 After 20 years in the aviation sector (manufacturer, international coordination) and 8 years in a worldwide non-for-profit organization on Sustainable Development, Philippe Fonta is now advising companies and organizations on Sustainability, Corporate Responsibility, and Uncertainties Management through his SCRUM-Consult consultancy firm.

Do not hesitate to contact him by email: P.fonta@scrum-consult.com

There are obviously different sources of SAF, from municipal solid waste to agricultural waste residues, waste oils and some form of biomass (no competing with food chain). The Emission Reduction Factor (ERF) of these SAF seem to be between 70% and 80%, so they are quite promising.

But there is another solution which looks even more promising: the development off so-called e-fuels or Power-to-liquid (PTL) fuels. Using renewable electricity to convert CO2 (captured from industrial processes or directly from the air) into SAF. They could be deployed anywhere in the world, initially near existing industrial facilities as the capture of CO2 from industrial facilities is more efficient than from Direct Air Capture (DAC) from the atmosphere where CO2 is much more diluted. Combining this potentially unlimited source of supply with green hydrogen would make the process more efficient.

Some heavy industrial sectors, such as cement or steel manufacturing are considered as “hard-to-abate” sectors[6], together with international maritime and aviation sectors, because they will have difficulties to de-carbonate their activities. For instance, in 2018, the cement sector developed a low-carbon technology roadmap in partnership with the International Energy Agency (IEA): this roadmap identified that in order to match the 2°C scenario of the IEA (2DS[7]), about half of the emissions of CO2 from the sector will need emerging and innovative technologies, carbon capture[8] being one of them. The cement sector has been active over the past decade on studying and developing pilot projects on carbon capture utilization and storage (CCUS). Recently, LafargeHolcim, a major worldwide cement manufacturer, partnered with OMV, VERBUND and BOREALIS for the joint planning and construction of a full-scale plant by 2030 to capture CO2 and process it into synthetic fuels, plastics, or other chemicals.

The project, named ‘Carbon2ProductAustria’ (C2PAT), aims at converting the 700,000 tons of CO2 per year into synthetic fuel by OMV.

This example shows that no-one will solve the challenge of climate change and CO2 emissions alone, and that gathering multiple stakeholders on a single hub location would enhance synergies of success. 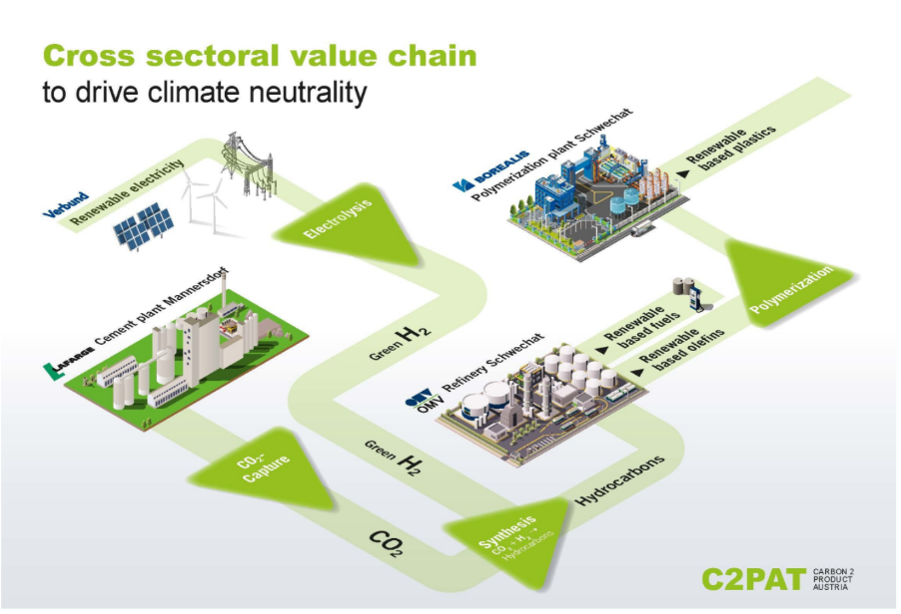 Is this opportunity of grouping activities into hubs and produce synthetic fuels for aviation happening? Up until recently, I would have argued that the sector has identified the technical opportunity but did not engage in such partnership initiatives. However, beginning of February 2021, three main announcements indicated a possible change in the mindset:

On February 8th , 2021, during the High-Level Conference on Synthetic SAF organized in the Netherlands, two main initiatives were launched:

On February 11th, 2021, whereas most of the French media attraction was directed towards the decision of the French government to cancel the extension of CDG airport, a more positive initiative was launched by Groupe Aéroports de Paris (ADP), the Île-de-France Region (Paris area), the Choose Paris Region agency, the Air France-KLM group and Airbus: “an unprecedented call for expressions of interest to explore the opportunities offered by the hydrogen at Paris airports and meet the challenge of decarbonizing air transport activities”. The objective is to create a real “hydrogen hub” at Paris airports by building an ecosystem federated around hydrogen, with major corporations, laboratories, start-ups and universities.

It is worth noting that in January 2021, representatives from the European aviation sector and environmental groups, together with a research organization and a sustainable aviation fuel supplier, have come together to provide recommendations to EU policymakers on sustainability aspects and support for future aviation fuels. Among the recommendations put forward in a consensus statement published by the initiative are to:

Aviation will definitely need new sources of energy and fuel to fully decarbonize its activities. New types of energy for aviation (electricity and hydrogen) offer real potential for short-haul aircraft in the coming years. However, in the meantime and to fuel longer-haul flights, responsible for about 80% of the global CO2 emissions from aviation, Sustainable Aviation Fuels (SAF) will play a key role and their potential needs to be scaled-up and supported by governments and the financial community.

All types of SAF need to be considered if they meet the quality and sustainability criteria defined by ICAO and the certification bodies. As airports represent the places where aircraft are refueling, as they are frequently located close to industrial activity where CO2 could be captured at industrial sources in more concentrated forms than through direct air capture (DAC), they are an ideal place to develop Power-to-Liquid (PTL) fuels. Combined with green hydrogen, that could also be produced within airport boundaries, airports should enter into a new hub era, concentrating some fuel production activities within their perimeter, thus reducing the need to transport this fuel and the volume of storage, being used by aircraft and other airport vehicles (hydrogen buses and trucks for instance).

Partnerships needs to be established and cooperation between different sectors of the “had-to-abate” sectors through which the carbon produced by heavy industries could become the source of fuels for others, creating a New International Carbon Economy (NICE).

[4] The IPCC Special report “Aviation and the Global Atmosphere” in 1999 estimated that aviation emissions were around 2% of global anthropogenic emissions (1992 data): Page 6 of the Summary for Policy Makers (SPM)

[7] 2DS is an IEA scenario with at least a 50% chance of limiting the average global temperature increase to 2°C by 2100.

[8] “The integration of emerging and innovative technologies like carbon capture and reducing of the clinker content in cement are identified to provide the largest cumulative CO2 emissions reductions in the 2DS compared to the RTS by 2050, with 48% and 37% contributions, respectively.” Page 5 of the Technology Roadmap – Low-Carbon Transition in the Cement Industry (iea.org)

Airports around the world are signing up to ACA

More than 290 airports took part in the Airport Carbon Accreditation program and got their certification, with more than 60 participants who reached the Level 3+ “Neutrality”. For more information about this program and why airports should submit to it, please visit our Solutions page about ACA.

According to the companies in charge of dismantling aircraft (represented by AFRA) and recovering the parts for recycling or reuse, 92% of the total weight of an aircraft can be recovered.

According to the EASA Annual Report, the average fuel consumption of commercial flights decreased by 8% since 2014, and 24% since 2005. These numbers take into account all departures from the European Union and European Free Trade Association.